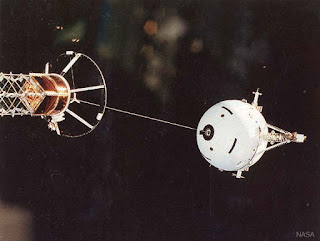 Today's Astronomy Picture of the Day shows Tethered Satellite System 1, an attempt to use a tether going from the Space Shuttle Atlantis to a satellite. What would such a thing be used for? Possibly (at the large scale) a space elevator. Or generating power. Changing orbits. Cleaning "space junk".

I think my first encounter with tethers was in the science fiction of the late Robert L. Forward, who even had a company exploring the concept.
Posted by Frederick Paul Kiesche III at 1/07/2018 08:34:00 AM