Science Fiction and the Post-Apollo Blues

Here's a talk that Terry Bisson gave in 1993. Good stuff here about and for those of us who grew up with Willey Ley, Apollo, the promise of the shuttle and more.

Keeping on the science fiction theme (not much news to report in the world of space, so far today!), here's a link to the website of SF author David Gerrold.

Gerrold got his start as a write of short SF and screenplays for the original Star Trek series. He's also written a number of SF novels. One, The Man Who Folded Himself, is an interesting time travel/parallel universe novel. Another, When Harlie Was One, is one of the few SF novels dealing with the development of artificial intelligence where the AI doesn't go berserk and try to kill the human race (the other is Robert A. Heinlein's The Moon is a Harsh Mistress).

Gerrold was also instrumental in the development of Star Trek: The Next Generation. He even had to take a case to arbitration when it was alluded that he was not heavily involved, and was denied back pay (he won).

The introduction to the 1995 edition of Star Hunt has an amusing chronology of the series of books and proposed movies and/or television series based on this story. There have been a number of failed attempts to get the story told on the big and little screen, one even involved another Star Trek veteran (D.C. Fontana).

Gerrold's older stuff has been picked up by BenBella Books, publishers of an excellent reissue of John Brunner's The Sheep Look Up (link updated in 2019 for a edition from another publisher).

There is mention of another book in the series, Blood and Fire (link updated for 2019). From some of the text in other sources, it appears to be a reworking of a story for Star Trek: The Next Generation that did not pan out. I'll be interested in seeing what he's come up with.
Posted by Frederick Paul Kiesche III at 10/20/2003 11:42:00 AM No comments:

Here's an article that appeared in SFRevu by David G. Hartwell and Kathryn Cramer. If you don't know who they are, seek out any one of the books that they have edited or co-edited for Tor Books. Among the excellent titles that I own are The Ascent of Wonder and The Hard SF Renaissance.

I hope this article is an indication that they are working on another massive tome, this time dedicated to the subject of space opera.

The Lensman Meets the Skylark 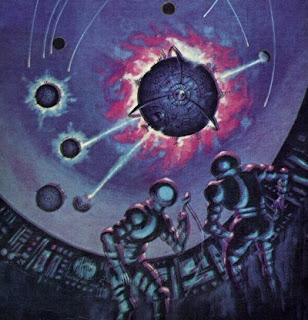 E.E. "Doc" Smith is one of my all-time favorite authors in the science fiction sub-genre of "space opera". Very few could do it as well or better—John W. Campbell, Jr., Edmond "World Wrecker" Hamilton and Jack Williamson among a scant few others.

There have been a few folks who have tried to write sequels to the original stories. More are but pale imitations (and forget about that horrid Japanese anime version!). Here is some "fan fiction" set in "Doc's" universe: Doomed Lensman (Part 1, Part 2, Part 3, Part 4, Part 5, Part 6, and the unwritten sequel!)!!!
Posted by Frederick Paul Kiesche III at 10/20/2003 10:56:00 AM No comments: