Found a copy of JWC's Cloak of Aesir—in hardcover! With an intact dustjacket! First edition, from 1952, in pretty darn good condition.

The collection contains several independent short stories, as well as two mini-series: "Cloak of Aesir" and "The Machine". The stories are from his "Don A. Stuart" period, when he started writing more "atmospheric" stories as opposed to the "Blood and Thunder" space opera stories that he started his career with.

Good stuff, holding up very well (for the most part). In fact, the "Don A. Stuart" stories hold up better than many of his John W. Campbell, Jr. stories (as much as I love space opera).

Quick: What is the origin of the pseudonym "Don A. Stuart"?

Addendum (October 31, 2002): Pete Young (See the blog-formerly-known-as-Flying-Sauce) wrote: I've consulted the Oracle (Encyclopedia of SF) and come up with nothing...!

Well, toss that encyclopedia out the window. Don A. Stuart is taken from the lovely Mrs. Campbell...Donna Stuart in her unmarried life!

Addendum (November 15, 2002): ...and speaking of Don A. Stuart, the nice folks at NESFA, through their publishing arm, have a collection of the Don A. Stuart stories of John W. Campbell, Jr. on their schedule.

Email ThisBlogThis!Share to TwitterShare to FacebookShare to Pinterest
Labels: Reading, Science Fiction, The Year in Books

Voyage of the Space Beagle 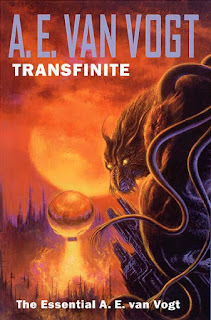 I finished David Weber's Honor of the Queen and have plunged into Voyage of the Space Beagle by A.E. Van Vogt. It's been a very long time since I've read this...probably pre-Alien.

The reason I bring up Alien is that the preface claiims that Van Vogt sued and won a "substantial amount" of money from the producer's of Alien on the claim that the movie was "derived" from the book.

Myself, I don't see it. Very few similarities other than an alien on the ship (and that's only the first third or so of the book).

On the bus home last night, reading Space Beagle on the Handspring, the soundtrack to Forbidden Planet comes on the MiniDisc (yes folks, it's a total immersion experience...anything to overlook the fact that I'm on the bus!).

I was reminded that I always thought that Forbidden Planet was a damn good filmed version of a lot of stuff that Van Vogt wrote about, especially Space Beagle.

But for some reason, the folks who did FP were never sued. I guess back in the 50's, when the film was made, nobody thought of such a unique idea!

Well, mystery over the lawsuit solved. I had forgotten that Voyage of the Space Beagle is made up of several short stories. One of them involved a pretty indestrctible alien that gets on the ship and manages to "impregnate" several crew members by planting eggs into their stomach areas. Scenes involve chases through ventilating shafts, the crew attempting to escape via lifeboat and the like.