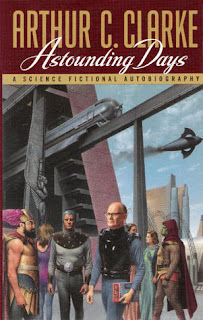 Take this book, along with Greetings, Carbon-Based Bipeds! and Ascent to Orbit (which I am currently reading), and you're probably as close as we're going to get for an autobiography from Clarke. Try to seek this book out, as it is a lot of fun. Clarke takes us on a tour of the stories that affected him the most in Astounding (the magazine of science fiction during the "Golden Age"). On the way we not only learn about life in England before and during WWII, but about the origins of the British Interplanetary Society, British fandom and even Meccano:


In an article by Lord Taylor published in the Christmas 1978 edition of the British Medical Journal, the author describes a medical complaint known as the "Presenile Meccano Syndrome." The "victims" of this obsession apparently fall into the affluent middle-age category, people who are able to buy huge Meccano outfits and indulge themselves after possibly many years of not being able to afford to do this. In two out of three cases, the gentlemen concerned are content to gaze at their outfits through the cellophane wrappings, while the third, who has probably never constructed a Meccano model in his life, delights in dismantling the models of others and very carefully replacing the parts in the appropriate compartments of the carton. Well, I have some good news for the eminent medic. There's a complete cure for the Meccano Syndrome: it's called a Personal Computer...Unfortunately, the cure is much deadlier than the disease.

It's a very chatty tour and one full of fun and amusement. I got much more out of this brief volume than from all of Neil McAleer's authorized biography. And, as with Clarke's other books, I can feel my wallet groaning as scores of stories, articles and books get enthusiastically mentioned by Clarke.

There's also a beautiful cover by Chris Consani depicting Clarke in a "period" costume surrounded by the denizens of a typical pulp SF magazine cover in a pulp SF magazine city. Great stuff! (The artwork above is not the cover of the book...I can't find it online...but it has the same "feel".)

My complaints? Well, it's a pretty short book. I would have loved to had something a bit longer (maybe not as long as Asimov's autobiographical work!), covering some of the other magazines that influenced Clarke (for example, Amazing Stories).

My biggest complaint? I need to find another copy of the book, maybe the Gollancz edition. I bought this book when it first came out, and read it then. It has been kept on a bookshelf, out of the sun, no smokers allowed, etc. The paper is in horrible condition! Yellowed, crinkly, feels like it is of the same pulp as, well, the magazines Clarke writes about. Obviously not "acid-free"! I've got books published in the 1940's that are in better shape than this one!
Posted by Frederick Paul Kiesche III at 2/02/2006 06:38:00 AM No comments: