The Savage Tales of Solomon Kane 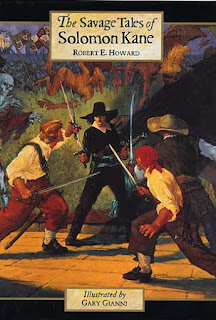 Del Rey has been coming out with a series of trade paperbacks containing the works of Robert E. Howard. This installment was The Savage Tales of Solomon Kane. Other than a short encounter with this character sometime during college, I wasn't really all that familiar with Kane. As I recall, I thought the idea of a Puritan running around getting into sword fights, pistol duels and various encounters with the fantastic and supernatural was pretty silly.

However, when I spotted this book in the store, I was interested. For one, the artwork, by one Gary Gianni, was excellent. It seemed to really capture the pen-and-ink style used in the pulps that stories like these originally appeared in. For another, since this was a complete set of Kane stories, I figured I'd get a pretty good sense of the worth of the series.

The stories are pretty darn good, and I'll have to read more of Howard's stuff ths year. I have a feeling that my appreciation of his writing was probably ruined by the various camp followers (ranging from the good such as Poul Anderson to the simply atrocious such as Robert Jordan) who have attached themselves to Howard over the years. These tales (overall) were nicely plotted and had some good characters, not the least of which is Solomon Kane himself.

The stories range pretty widely and seem to be arranged in chronological (for the stories) order. Kane starts out in England, travels through Europe, and then (for the bulk of the book) spends a lot of time in Darkest Africa. While Howard occasionally slips into less than politically correct characterizations at time, many of the secondary characters in the African sequence are written a lot more sympathetically than his contemporaries.

There are a number of story fragments scattered throughout the book. It's a shame that Howard never finished them, as I would have liked to see how they ended. There are also a couple of poems about Kane, as well as a article by H.P. Lovecraft on Howard's death, an essay by the artist, and couple of articles in the end. These include a biography of Howard, a profile of the artist, and a series of notes on the texts themselves.

The book is made up of: Foreword (Gary Gianni); In Memorium: Robert Ervin Howard (H.P. Lovecraft); Skulls in the Stars; The Right Hand of Doom; Red Shadows; Rattle of Bones; The Castle of the Devil; Death's Black Rider; The Moon of Skulls; The One Black Stain; The Blue Flame of Vengeance; The Hills of the Dead; Hawk of Basti; The Return of Sir Richard Grenville; Wings in the Night; The Footfalls Within; The Children of Asshur; Solomon Kane's Homecoming (two versions); A Short Biography of Robert E. Howard (Rusty Burke); Gary Gianni; Notes on the Original Howard Text.

Email ThisBlogThis!Share to TwitterShare to FacebookShare to Pinterest
Labels: Fantasy, Horror, Reading, The Year in Books, The Year in Shorts

In Robert A. Heinlein's 1949 novel Red Planet depicts a struggle of colonists on Mars trying to fight back against an Earth-imposed government that does not understand what it takes to live on Mars. The books depicts that Mars of Percivel Lowell: canals, ruined cities and Martians (reused by Heinlein in other books such as The Rolling Stones and Stranger in a Strange Land).

Part of the plot revolves around the journey of the main characters, Jim Marlowe and Frank Sutton, to warn their fellow colonists of the plans of the Mars Company. To survive a night on Mars, they hide inside a large plant that resembles the Earth skunk cabbage. Despite freezing temperatures, the plant is able to survive. Perhaps it is a cousin of Earth's skunk cabbage, which was recently found to have a mechanism to combat freezing?