The Curious Incident of the Dog in the Night 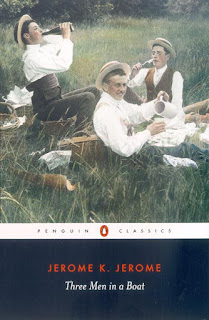 Three Men in a Boat: This book has been in the background for much of my life. I'm moderately sure of seeing a copy in the house of my maternal grandparents. It is referenced several times in Robert A. Heinlein's YA novel Have Space Suit, Will Travel. I even came across a filmed version of it starring the likes of Tim Curry, Michael Palin and Stephen Moore (anybody know why this is not currently available in the US?). I even had several eBook versions, from the early days of Project Gutenberg to the more recent versions listed below.

But, for some reason, I never read the dang thing.

I spotted the omnibus edition from Penguin and picked it up (despite having both books in electronic format, you see both can co-exist!). Since this is another summer without vacation (long story, several long stories, actually), I have taken a couple of weekend camping trips with The Young Lady. I brought this along on the first. We were caught in traffic, caught in a downpour, got to the site in the middle of the night, rain continued to pour, the tent gave me trouble getting set up, the rainfly blew off in the middle of the night and soaked our sleeping bags before I could get a spare tarp set up...

While we were drying out the next morning, I started reading the book and started roaring in laughter. And continued throughout the book. 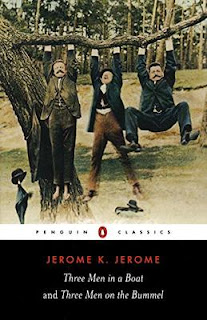 J. (Jerome K. Jerome), George, Harris (to say nothing of the dog, Montmorency) decide to get back to nature and travel up in a small boat on the river Thames, camping out on the banks or in the boat, living the rough and rustic life. Hilarity ensues in a series of set pieces: how to pack, how to row, what happens when you set up a tent at night or in the rain (heh), what happens when yo forget a vital piece of equipment (should I mention that this camping trip had a side trip where I went and bought another camping stove...as I had forgotten to pack our camping stove?).

Good stuff for anybody who has ever camped. Good stuff even if you haven't. On to the second book!

FTC Disclaimer: This paper book was purchased. The eBook is 100% free electrons.

Addendum: If only this version that appeared on television was once again available! 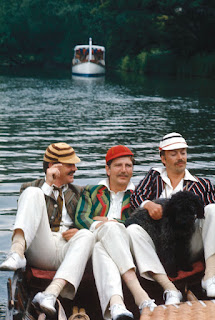