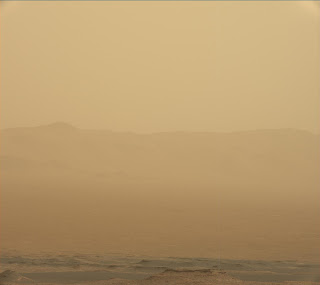 Today's Astronomy Picture of the Day is a small glimpse of the dust storm that has engulfed Mars. Taken by the MSL Curiosity, nearly all visibility has been wiped out by the particles in the air. On the other side of the planet, the solar-powered MER-B Opportunity has been put into a state of suspension in the hopes that it can be wakened when the rays of the Sun again strike its solar panels.
Posted by Frederick Paul Kiesche III at 6/16/2018 09:01:00 PM