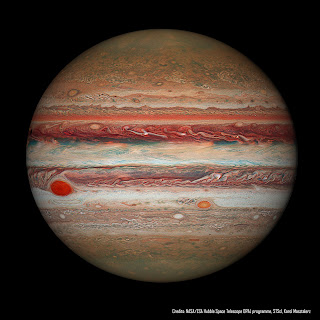 Today's Astronomy Picture of the Day is a detailed view (courtesy of the Hubble Space Telescope, long may it operate!) of Jupiter. What's that blemish on the face? It's the Great Red Spot, a massive storm system that has been observed for 150 years. Alas, of late, the Great Red Spot has faded and shrunk and seems to be going away. As you can see from the image, it is not the only storm that you can see when observing Jupiter (and maybe one of them would grow), but the loss of the GRS would be a sad thing for all of us who have observed it.

One of my most intense times observing as an amateur was a night when the atmosphere on our planet coincided with a observation of Jupiter that included the GRS transiting the face of Jupiter with bonus appearances of both moons and moon shadows across the face. I watched, fascinated, and then wondered why I was so cold and my legs were so stiff. It turned out that I had spent most of a cold January night outside, watching the skies.
Posted by Frederick Paul Kiesche III at 4/25/2018 06:32:00 AM