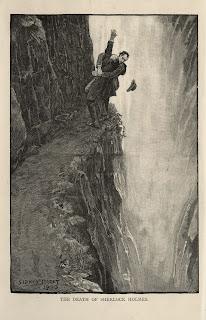 I've read the Canon of Stories concerning the adventures of Sherlock Holmes (usually, but not always with his companion, Dr. John Watson) several times over the years: scattered short stories and novels when I was a child, end-to-end in college, end-to-end a few more times since then, most recently end-to-end in an annotated edition (see below).

This was the first time in several years, as I Had A Plan (also see below!). As such, I think my memories of the stories were distorted through the lens of several film and television adaptations of the stories (some more faithful than others!). I had forgotten, for example, that there were several stories written in a third voice (see The Adventure of the Mazarin Stone as an example), as if told directly by Sherlock Holmes himself (see The Adventure of the Lion's Mane as an example) or where Dr. Watson took a very active role in the story (see The Hound of the Baskervilles as an example). In fact, poor Dr. Watson! Forever ruined in our minds, I think, thanks to this depiction of his abilities!

I was even startled to re-discover the appearance of the famous hat and the famous phrase. For some reason I had it in my mind that both were inventions from the various adaptions. No, he didn't wear the hat every story and the phrase only appears once that I can now remember, but it was nice to come across both.

Overall feelings this time through? Doyle is a much better writer of short fiction than long fiction. Of the four novels, I think only The Hound of the Baskervilles really can stand up. The other three have too much exposition and backstory in them, cut all that out (as some adapted versions in other forums have done) and you have a much stronger tale.

Most of the stories are strong on their own and many are classics of the mystery genre. However, you can see when Doyle started to tire of his creation (read about The Final Problem and The Great Hiatus for more about that) and started to recycle or toss things together quickly: the later you go, overall, the weaker the tale. Was he the first to be plagued by a creation that the public loved and that the creator wished to be rid of?

You also can see a bit of careless repetition here and there, either from haste or forgetfulness. Unlike author's of today with computer tools or fans who develop "wikis" and the like, Doyle often re-used the damsel in distress, or (much to my amusement) the mysterious American more than a few times. Mysterious societies and strange ancestors, odd houses and lodgers and more make more than one appearance.

Great stuff and these (and more) more than compensate for any "weakness" I noticed on the way through.

Holmes can be found, even today, in new stories. There are adaptions, with the Jeremy Brett version (still) my personal favorite. Holmes is everywhere, in New York, portrayed by Peter Cushing (with Christopher Lee co-starring), Tom Baker (did you know about that one?) and even wildly differently by both Benedict Cumberbatch and Robert Downey, Jr. On the fictional front, there are even more stories, novels about Holmes, novels about Irene Adler and more. My favorites there are those written by film director and occasional novelist Nicholas Meyer (one of which was adapted to film).

Your Mileage May Vary on the pastiches, but it's a great way to get past the original stories (and who knows, maybe there's a Holmes story in you as well!).

Otherwise...I started re-reading the Canon of Stories in 2014, but did not get as far as originally intended.

The plan, as originally laid out, was I was going to read all the stories in this collection straight through. Then I was going to tackle the original annotated collection: William Baring-Gould's massive tome that was my first introduction to the concept of Sherlockian Studies. I had read this through a couple of decades ago.

Baring-Gould did a great job in annotating the Canon, but it seems to have fallen out of favor over the years. Some quibble with his ordering of the stories, some quibble with his scholarship. But it deserves a place as the first effort, if nothing else.

I haven't decided if I'm going to tackle these again. The problem is physical. These are massive volumes (especially if you don't have the two-volume version and only have the utterly astounding SINGLE volume). Not a book you can read in bed, at night; you'd be crushed if it slipped from your grasp! Maybe if I get my posterior in gear and finally clean sufficiently the computer/work/library room and have enough space on the desk to lay these out!

I'm definitely tackling the Klinger editions next, hopefully at a more measured pace than I did with the Bantam edition. I think that possibly part of my problem with the last stories was as much that Doyle was wearied of Holmes and I was wearied of the stories. There are some classic stories in the last collection, maybe I will appreciate them more if I pace myself!

Email ThisBlogThis!Share to TwitterShare to FacebookShare to Pinterest
Labels: Mystery, Reading, The Year in Books, The Year in Shorts