Doorways in the Sand 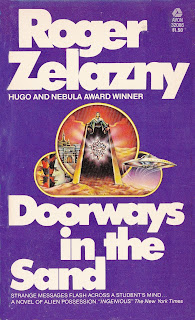 REVIEW SUMMARY: One of Zelazny's more standalone works that shows off his polished prose, humor and frantic pacing.

BRIEF SYNOPSIS: Fred Cassidy is doing his best to remain a student. However, after being robbed, staked out in the sun, "protected" by alien police and probed by an alien telepath, even graduating from college seems like a lesser evil.

PROS: An excellent display of Roger Zelazny's wordsmithing at its best. A mixture of polished prose, some literary experimentation, and a plot full of red herrings and MacGuffins worthy of an Alfred Hitchcock film.

CONS: Until Zelazny is recognized as a "literary" figure and gets enshrined on our shelves along with others (such as Philip K. Dick), you're probably going to have to scramble to find this and other gems.

BOTTOM LINE: In a single volume you get what was always the best about Roger Zelazny. The magic of the plot where you're never sure of what exactly is going on. The carefully chosen prose, honed down to the bare essentials. The occasional bit of literary experimentation. 181 pages, a single volume, no sequels, no padding, no fluff. Pure magic.

Fred Cassidy is doing his best to stay in school. Despite the efforts of multiple academic advisers (all of whom want to graduate him), he has managed to skip from major to major for thirteen years (he gets a stipend from his late Uncle Albert as long as he is not awarded a degree). But things get strange when one of his professors turns up to ransack his apartment and question him about a reproduction of an alien artifact known as the Star Stone. Fred goes Down Under and into the Outback to pursue a project for college only to be attacked and staked out in the sun to become a human raisin; he is "rescued" by two aliens (dressed as a wombat and a kangaroo) and taken into "protective" custody.

Not strange enough? How about the words he sees in the sky or in windows, or the voices that echo from dreams. Toss in the State Department, the United Nations, two alien telepaths that try to "help" (one is a cost accountant, so is not very good as a telepath), ex-academic advisers who turn up in odd places, friends of his uncle, associates of his uncle turned bad, more aliens, another alien artifact that can turn you inside out.

More? How about a predilection for climbing buildings. Reversed greasy-spoon hamburgers and fries that taste like the best meal you've eaten; reversed brandy that is the nectar of the gods. Cigarettes and booze, booze and cigarettes. An alien menace. A fight in the sky. A journey to the stars and the start of a new partnership.

There's something about writer's from a certain age—maybe it was using a typewriter and carbon paper or a need to get as much prose into the slicks, pulps and between the hard covers as possible or genetic imprinting from the old school—that caused them to write briefly but beautifully. Zelazny, like Arthur C. Clarke, Clifford D. Simak, and Alfred Bester packed a lot per page. Whereas somebody today would give you an infodump of several pages to explain how an alien object, for example, could reverse you, Zelazny tosses the idea off in a sentence or two, mixing it in with dozens of other bits and pieces throughout the book. Indeed, this book reminds me strongly of all those writers. Like Clarke, Zelazny packs more ideas into his pages than most other authors manage in the space of a career. Like Simak, he employs a sparse style and an economy of words as well as creating memorable aliens. Like Bester, he experiments with prose and typographical layout as well as making the ordinary extraordinary.

(This novel in particular reminds me of another genre craftsman: Spider Robinson, especially Robinson's tales of Callahan's Place. It would not have surprised me one bit to have Fred Cassidy, in visiting the several bars that appear in this book, stop in at Callahan's and tell of his story and find help from Jake and the others.)

I've lost track of the number of times I've read this book since I first read it as a serial in the pages of Analog in 1975. Every time I do read it, it manages to once again charm me, thrill me, and surprise me. As it did so again this evening, and as I hope it will do so for you.

(The edition most recently read was an eBook. Alas, the quality of proofreading when converting form the paper book to the electronic format seemed to become less careful the further into the book I got, resulting in a number of annoying typographical errors.)

(This review originally appeared on the late, lamented SF Signal website in 2009.)

Email ThisBlogThis!Share to TwitterShare to FacebookShare to Pinterest
Labels: Science Fiction, The Year in Books