At the Edge of the World 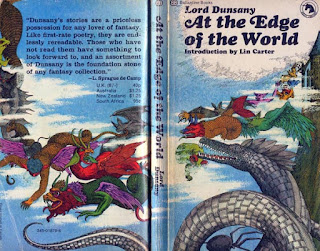 Made up of: About "At the Edge of the World" and Lord Dunsany: The Dreams of Mana-Yood-Sushai (Lin Carter); The Cave of Kai; Of the Gods of Averon (variant of The Sorrow of Search); Mlideen; The King That Was Not; The Men of Yarnith; In the Land of Time; Time and the Gods; The Opulence of Yahn (variant of Usury); The Fortress Unvanquishable, Save for Sacnoth; Poltarnees, Beholder of Ocean; The Idle City; Bethmoora; Idle Days on the Yann; The Hashish Man; Carcassonne; In Zaccarath; The Dream of King Karna-Vootra; How the Enemy Came to Thlūnrāna?; The Distressing Tale of Thangobrind the Jeweller, and of the Doom That Befell Him; A Shop in Go-By Street; The Avenger of Perdóndaris; How the Dwarfs Rose Up in War (variant of A Pretty Quarrel); The Probable Adventure of the Three Literary Men; The Loot of Bombasharna; The Injudicious Prayers of Pombo the Idolater; The Bride of the Man-Horse; The Quest of the Queen's Tears; How One Came, as Was Foretold, to the City of Never; A Day at the Edge of the World (variant of The Long Porter's Tale); Erlathdronion (variant of A Tale of the Equator); Epilogue to "The Book of Wonder"; Afterword (Lin Carter).

Lord Dunsany influenced a number of writers, including (probably most famously) H.P. Lovecraft. These stories are from several of his collections, gathered by BAF series editor Lin Carter into one (loosely) associated collection. They are generally very short, both in length and the quality of the characters and are very burdened by Dunsany's orate style which may not sit well on the ears of the "modern" reader. However, there are some real gems here, such as The King Who Was Not (during which a king disbelieves the gods, only to have the gods disbelieve him, and thus his people wonder why there's a robe and crown in an empty room of that castle) or The Land of Time (in which a king and his armies attempt to fight time to save their bright civilization, only to learn the hard way the Time is always the winner).

As I said, the style may not have aged well. However, taken one or two a day, sitting in one's backyard on a cool summer day, under a flawless blue sky, one is transported beyond the fields we know and into the lands at the edge of the world.

Email ThisBlogThis!Share to TwitterShare to FacebookShare to Pinterest
Labels: Fantasy, The Year in Books, The Year in Shorts