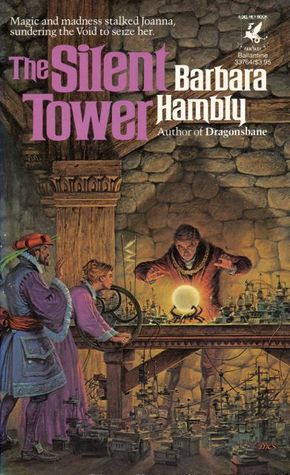 I first came across Barbara Hambly when she first started being published in the 1980's by Del Rey Books, as part of their fantasy line. With books such as the first of the Darwath books (The Time of the Dark) and the Sun Wolf sequence (The Ladies of Mandrigyn). They were fun fantasy novels, different from the usual Del Rey fare, quick reads and interesting reads as well. In 1986 came the first of the Windrose Chronicles, The Silent Tower, with elements of both our world and a fantasy world, with implications for both.

Joanna Sheraton is a programmer at a US government research center who comes across an intruder where none should be, in the heart of a 1980's supercomputer machine room...a man using...candles. No trace of the intruder is seen later until Joanna is drawn into another world when she is at a party of her somewhat flaky boyfriend. She teams up with Caris (guardian of and relative to Archmage Salteris) and Antryg (student of both Salteris and the so-called Darkmage Suraklin) to try and find out whether Suraklin has somehow managed to return from the dead and has taken Salteris prisoner between the worlds.

Friends become enemies and vice versa (intentionally or not) as the trio try to unravel what exacttly is going on as they travel across the Earth-that-is-not-Earth and back to Earth at the ending (spoilers for a book that was first published in 1986) leading to a...cliffhanger.

Good thing I already have the second (first read in 1988, but repurchased as an eBook more recently)!

Like the briefer (and better) Tea with a Black Dragon (R.A. MacAvoy), The Silent Tower mixes our world and the world of our technology—the still nascent world of computer (at that point at least) with decent female characters and a interesting plot. Does it still hold up? I think Joanna gets into the trappings of the alternate Earth a tad fast (especially when it comes to clothing), but she definitely is a strong character and central to the (cliffhanger) resolution. The book held up on this re-reading (some decades later) and I will take up the sequels as well.

Email ThisBlogThis!Share to TwitterShare to FacebookShare to Pinterest
Labels: Fantasy, Reading, The Year in Books