I was asked (along with several other people) to tag a game that I was a fan of that was "big". It got me wondering: what is big? 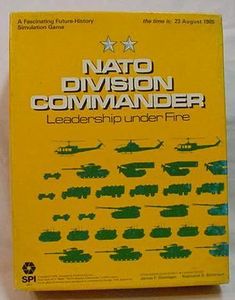 Are we talking one division? If so, here's a big one. A classic from SPI. Probably "out of favor", but I always had a soft spot for both SPI and for armor games. In addition to this one (and one title below), I also collected a series of SPI (and later company) titles that broke the European theater up into a series of smaller games that could be linked up to make one massive game (see also GDW's The Third World War and GMT's Next War games). This game had some interesting leadership mechanics and fed into (I think) GDW's miniatures series, Command Decision. 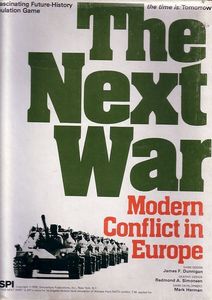 How about one theater? Here's one that definitely resonates with me. The Next War is another SPI "monster" (or, I just learned "soapbox") game. Ah, the Third World War. Maybe not as much cardboard was spilled over the plains of Europe as, say, the Second World War, but it has to be close. 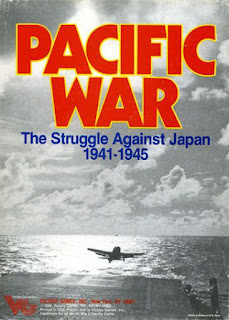 Speaking of the Second World War, here's a relatively recent acquisition on that subject, again, one theater. In this case, the Pacific Theater. Designed by somebody who has become an automatic purchase (see the title listed above!). I've got Mark Herman's other Pacific title on preorder (and own two related games) from GMT Games and hope to see that sometime this year. 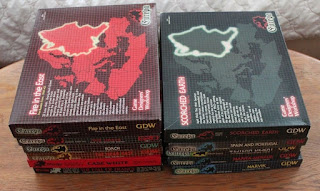 Next up, linked games! How about the Second World War and a real monster? I don't have the entire run, but the Europa Series is a "grail" acquisition. Someday, someday. (More recently, lead designer Frank Chadwick has started a new series with Thunder in the East. Will this replace my desire to go all Europa?) I don't know, those stacks and stacks and stacks of chits are pretty attractive!

Sticking with Europe (are we sensing a theme in my area of interests), but moving back to that hypothetical Third World War, we have GDW's The Third World War. Not quite as many maps or many counters as Europa, but a monster nonetheless. I haven't pre-ordered the remake/updated version yet, but someday! 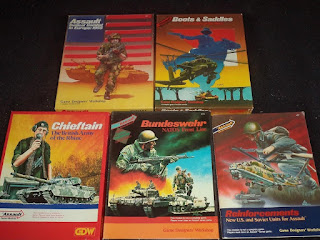 Stepping down in scale (in terms of units), we have another GDW series, Assault. I loved these games so much that I can count them as one of the reasons I eventually became a armored crewman myself.

So, how big is big when it comes to gaming? One theater? One ocean? The number of counters or maps? How about...one galaxy? 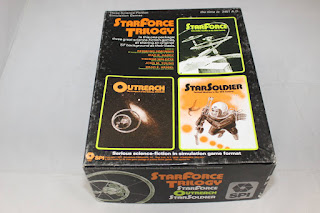 Finally, the StarForce Trilogy from SPI. I owned the three games individually in flat-packs, as the flat-pack trilogy, as a box of the first title, and as a soapbox of the trilogy (I still have all of these but the original individual flat-packs). StarForce concentrated on one part of our relatively local space, StarSoldier was set on one planet, but OutReach? About one-third of the galaxy. Now, that's a monster game!

Email ThisBlogThis!Share to TwitterShare to FacebookShare to Pinterest
Labels: An Age of Wonders, Gaming, Hobbies, Oh the Places You'll See, Those Darned Wingnuts, War and Military