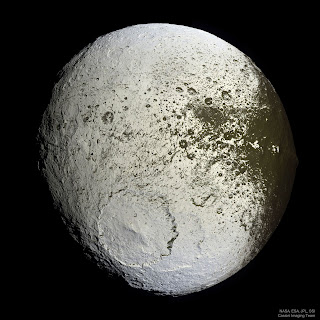 Today's Astronomy Picture of the Day shows Saturn's enigmatic moon Iapetus. Dark materials have coated half the surface, standing in stark contrast to the other lighter half. Even before being visited by the Pioneer and Voyager flyby missions and the Cassini orbiter, it was known that Iapetus had two strikingly different faces (and this even played a role in the novel 2001: A Space Odyssey by Arthur C. Clarke). What strange universe!
Posted by Frederick Paul Kiesche III at 6/03/2018 07:58:00 AM