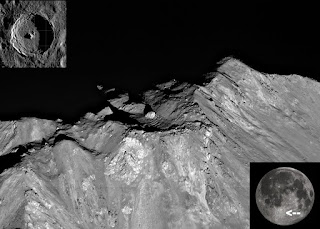 Today's Astronomy Picture of the Day is a wonderful image courtesy of the overlooked Lunar Reconnaissance Orbiter (launched to pave the wave for one of the previous returns to the Moon, which then was backwatered because we were going to Mars, then we were going to capture an asteroid, but now we're going back to the Moon, but let's not mention the cancellation of a mission which could have been a key to a sustained effort there...). We zoom in on Tycho, one of the easiest to spot of craters (you see it every time you look at the Moon near at at full phase). What's that sitting there in Tycho? One heck of a boulder!
Posted by Frederick Paul Kiesche III at 5/07/2018 08:00:00 PM